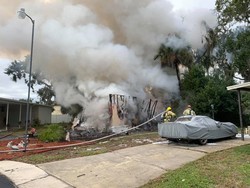 After the call came in around 9:30am this morning, crews arrived at Parkwood South community northwest of the Taylor and Spruce Creek roads intersection six minutes later.

It is not yet known if anyone was injured in the fire, but do know from Port Orange Fire & Rescue Chief Ken Fustin that “Two adults are now displaced,” According to Chief Fustin after confirming  the fire was under control, the cause of the fire is unclear at this time.

Christine Martindale the spokeswoman for The City of Port Orange stated that the firefighters found a small pit bull mix dog dead inside the home. The Fire Fighters buried the dog’s body in the backyard shortly after finding it.

Martindale assured us that “The fire will be investigated” by the State Fire Marshal.

The estimated damage to the home is around $75,000. The home owners also had a Chevrolet Corvette parked nearby which sustained around $5,000 worth of heat damage.

The home on either side of the fire also sustained heat damage estimated to be in the amount of around $10,000 each.