Karlee Harbst, age 26, of Port Orange claimed a $750,000 prize from a Florida Lottery Scratch-Off Game. The winning ticket was sold at a Circle K on Nova Road in Port Orange.

Harbst is an expectant mother who purchased a $20 Gold Rush Scratch-Off and won a $1,000,000 prize. Harbst went to Florida Lottery Headquarters in Tallahassee to claim her prize. She opted for a lump sum which is 75% of the total prize.

The expectant mother told Florida Lottery Officials that she had just won $100 the week before on the same scratch-off game.

According to lottery officials, the Circle K Harbst purchased the ticket from is receiving a $2,000 bonus commission. 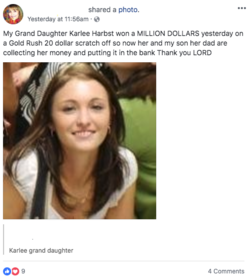