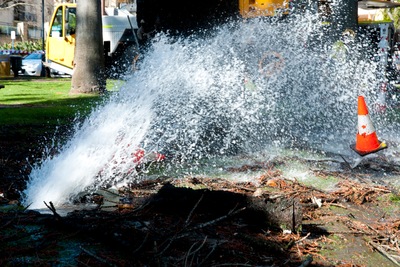 Port Orange, FL - When the water main break happened last month on Spruce Creek Drive it was an inconvenience to nearby residents who had to boil water for a few days. But for one couple, whose home backs up to the area that experienced the break, the incident was devastating.

The home, owned by Grace and James Lang, is located behind the site of the break and reportedly had water and mud flooding into the home for more than an hour before the break was repaired. According to the residents all the furniture, carpet, and a lot of clothing was ruined.

The Langs told a local TV station at the time that because the water main break was a city problem, their own insurance company won't cover it. At Tuesday night’s City Council Special Meeting and Workshop, council members received an update on the situation from City Manager Jake Johannson.

“We tried to put a claim through the City’s insurance carrier while an engineer surveyed the damage, meanwhile a disabled veteran and his wife are displaced, and we come to find out the claim will not be paid through our insurance, neither will the homeowners’ insurance pay,” said Johannson. “The City continues to pay for temporary housing. The mold mitigation and repairs to the home and the damages pool equipment are ongoing and returning the home to the ADA compliant way it was before. We’re not claiming responsibility but it’s the right thing to do.”

Council will not be approving or reviewing any emergency funding measures pertaining to this issue until the November 13th Council meeting, but Council members asserted helping the residents in their time of need is the right thing to do.

“We can’t take action tonight because this is not a consent agenda item, but it’s going to cost the City some dollars and even if there are legal questions that arise later we can’t let this stop us from making it right because it’s our system that failed,” said Mayor Donald Burnette. “We’re not kidding any of our dirty laundry and by bringing the issue to Council tonight for discussion I didn’t want the November meeting to be the first time we discussed this.”

Councilman Chase Tramont was most upset at the lack of responsibility on the part of either insurance carrier to cover the claim.

“I’m floored that the insurance companies have found a way to not take responsibility and do their part. I’ve visited the home. It’s sad,” said Tramont.

“Clearly, we flooded the house and we need to help them,” Ford said, “As a disabled veteran he (Lang) didn’t need this and anything we can do to make this right is only morally correct.”

The pipe that started this issue is reportedly a plastic pipe that had been resting on coquina rock and suffered a lateral crack that forced water out and ultimately in to the Lang’s home. The City has since replaced the broken pipe and disposed of the coquina rock so the new pipe rests on sand instead.

“With aging infrastructure things like this are going to happen, said Councilman Drew Bastian. “We need to do the right thing and assure the home is 100% mold free. The only thing to do is fix it.”

The City will continue to cover housing expenses and repair/mitigation costs to the couple’s home through an emergency funding measure which will ultimately come before Council for approval.